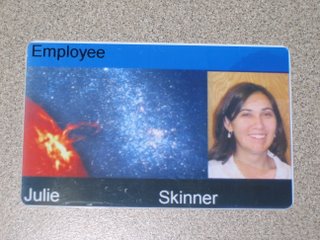 Well, I'm officially an employee of the NOAO (National Optical Astronomy Observatories). It's a nice feeling. This is my cool new ID card that lets me in to all the secret places around NOAO. I have 24/7 access. haha...anyway...My first day went really well and all the other REU kids are awesome. There's even one guy that's from Edmond. It really is a small world. We even figured out that we have a mutual friend. crazy! On another note, it is definitely blazing hot here. But...it's a dry heat. :) Let me just tell you, it's already in triple digits and I don't really care if it's a dry heat, it's freakin' hot. oh well...I'll just hole myself up in Rm. 27 of the NOAO building. That's the drab, computer-filled room that the REU students have been assigned to. I'll try and take a picture tomorrow. It's really bad. We'll try to spruce it up a bit. :)
For those of you who are astronomically inclined, I'll provide a little explanation about what I'm actually going to be doing this summer. Basically, I'm looking at data from 6 cataclysmic variables. These are close binary star systems that consist of a white dwarf (a very small, massive star) and a less massive companion (like a K or M star). My advisor, Steve, has taken data and plotted the radial velocity curve of one of our stars and has seen something rather interesting. There is a difference in the radial velocity curves when you look at them in different ways. This is not something expected, so we're going to try and determine why they look different and if this difference is true for all of our systems. This is important because these r-v curves help us determine the masses of each star and other things as well. I'm really excited because this is really new and we really just don't understand what is going on. Steve told me that if I got really ambitious I could even be first author on the paper that will come from this project. That's really exciting, so hopefully I will work really hard and figure some stuff out so we can pull it off. anyway...Sorry if this is confusing, but it's good for me to put it into words. It helps me identify what parts I'm not exactly understanding. anyway...Steve is really cool and is really helpful. He's also not too clingy, which is nice. He basically told me about the project and then said "you're a researcher, so you can organize the project however you want". This was a little intimidating, but nice at the same time.
Other than that, I've just been hanging out with the REU kids. We've been planning what we'll do with our weekends. So far, I think we're going to go to the Grand Canyon, Las Vegas and maybe even Los Angeles. Next weekend, we're going to venture to Phoenix to see the D-backs play the Mets. Small steps first. :) Well, it's off to bed for me. Goodnight!
Posted by Julie at 12:33 AM

Good pic on your ID. You look blissfully fulfilled. Gitty even. I'm glad you got to be there this summer.

I can't believe you had to explain all of that to people. I knew just by looking at your ID photo what you were doing this summer. (wink, wink) You do look blissfully fulfilled as j stu said. What a great experience! Dan is so jealous!!

Your photo on this ID doesn't look anything like your photo for the council.
http://www.eastleigh.gov.uk/meetings/mgUserInfo.asp?UID=917